Northern California. A place of towering trees, over-priced real estate and a passion for cannabis, and this weekend was the Nor-Cal cannabis community’s biggest party: The Emerald Cup. 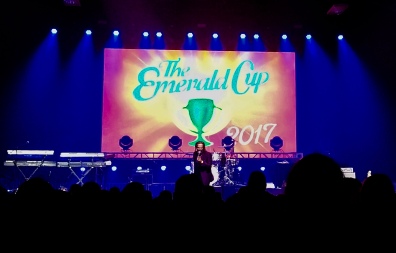 What is the Cup? It’s a contest for the best products and strains, it’s a B2B marketplace with new cannabis strains, resin extractors, trimmers, soil bags etc on display, it’s a brand showcase where every farm with a logo, instagram and enough cash on hand to afford a booth show to off their Glues and their Blues and their OGs and their Lemons and on and on. It’s also a dab fest, vendors offer unlimited free dabs to any and all people allowed into the 215 Area.

Emerald Cup 2017 revealed a subculture in transition. Classic Emerald Triangle full season flower farms were relegated to a secondary tent and had the feel of a darker, danker scene than the brightly lit brands in the Canna-Craft Pavilion of Pot. Flow Kana, one of the most well known and respected of the artisanal flower farm collectives was along the back wall. Moon Made Farm’s Tina Gordon handed out pre-rolls from a leather bandolier sash, proudly pointing to the QR and bar code on the plastic vial packaging “the first seed to sale track and trace!” The track and trace program is vital to preserving the value of cultivation area appellations, applied wine-like, to local cannabis. The Emerald Triangle is fighting to maintain its reputation, by statute and by brand. The traditional signifiers of Northern California weed culture were in this tented area: dreadlocks, balloony pants, semi-precious gemstone necklaces done in wire wrap settings, vegan edibles, a heavy downbeat from the speakers, and of course, the implied rejection of disposable corporate culture…

The Canna-Craft Home of the High, on the other hand, was an explicit grin at Big Pharma. One CEO told me that he could easily see his brand on the shelves of CVS. I told him about the branding of one company, Leef, that I could easily see being sold at Anthropologie. It’s all easy to see. Anyone sticking to muddy greens and swirly organic shapes looks like old news, it’s the clean look now. Black and white, with Pantone sanctioned color blocks, crisp like a tennis skirt and about as edgy. These companies are the rich white kids in the 80s Brat Pack movies. They may be getting high, but they’ve got bright futures in pharma boardrooms. It’s antiseptic and cool for the capitalistic set.

Chemistry, a small outfit out of Oakland, has a lovely white vape pen with a polygon rainbow in vogue tones for their logo. At nearly 80% THC this is a seriously mind-altering substance. You get just as high sipping on the pen as hitting one of those e-nail rigs, but boy you sure look a lot sharper with the pen. It’s not all optics. Chemistry won 3rd place in the Distillates category, vaulting into the rarified echelon of companies that a consumer (and investor) might recognize. They went from a tiny shared booth in the back corner with a product they launched last week to Cup-wide (or at least, distillate interest-wide) notoriety. Things can happen very quickly. The question for the fast-paced companies is: are they ready to scale when it happens? Being exciting now is great, but if you’re one year in with a five year exit and a nine figure valuation in mind, you had better time your top salability right. 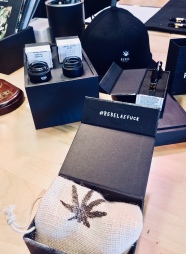 While Chemistry is a new company finding commercial success by dispensing with the stigma of the grimy black market days, Rebel Grown embraces it. Self-described “rebels of the past with a lifelong dedication to our craft”, they’re known for breeding top-of-the-line Diesels, and to stray too far from butch would have been out of step with their product. What they managed to do was create (craft?) a brand that stays loyal to the posturing of guerrilla growers in Humboldt, without alienating new consumers or women. Rebel Grown presents a muscular brand that manages to be tough without being intimidating. It’s not an easy row to hoe. They needed to sell a badass brand for their B2B products (the seeds and clones of high gas plants), to their commercial cultivator customers, but one that also worked on a retail consumable product. If Leef is selling CBD to rich girls in boutiques, and Chemistry is getting young professionals high, Rebel Grown is #rebelasfuck, and they’re what’s up at the rock show.

The mood of the Cup was upbeat. This is a sales event, after all, and many of the attendees were there for the party. Never mind the disquieting news that flower cultivators are struggling to get $800 per unit (one unit = one pound) that went for 3 times that just a few years ago, and just the cultivator’s tax to the state alone is $44 per unit. Never mind that next year there won’t be free dabs. Never mind if Cannabis gets rescheduled to Schedule II things might get really bad.

“It makes me sad”, said one entrepreneur I spoke to. We were standing in the middle of the fair grounds, watching the cheerful, slow moving crowd cluster around food carts and filter into a beer garden. Despite his success, he was wistful for the old days. “The new folks just don’t understand what this is like for us!” exclaimed a long-time cultivator, to a round of amens and head shaking. “I just got off 12 years of federal paper”, a lawyer I’d guess to be in his 60s said to me. “I did 6 years of federal time, I’ve been on federal paper for 12 years, I just got off this week. I kept my law license though, and my daughter is my paralegal. We are going to keep going, keep fighting. I’m going to hire a bunch of empty heads and strong backs right out of law school and litigate the hell out of these statutes.”

Prices are plummeting, but business is booming. There is still a sense of community and common cause, but the truth is that subcultures will remain subcultures, and the mainstream will remain anodyne. Is one wrong and one right? Can they coexist and support each other in a market? Will the Nor-Cal Spirit win out over East Coast avarice, Middle West sensibility, and Silicon Valley-style funding and business models? I sure hope so. There are a lot of good people working hard to keep the Northern California economy afloat in these uncertain and increasingly automated times, and we should all be in that together. The Emerald Cup felt united and excited, but fundamentally uncertain about how the next few years will go.